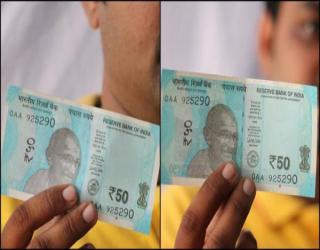 Fake Rs 50 new note in your pocket? Spot fraud now with this!

In the last two years, the Reserve Bank of India has changed the face of almost all the banknotes available in the country and it is likely to make further changes. Two new high denomination notes have been introduced in the market – one is Rs 2000 and the otehr is Rs 500, which were launched at the time of demonetisation. Thereafter came Rs 200, introduced on August 24, 2017 and then new Rs 50 currency notes have made their entry. Clearly, those who have not seen the new note can fall prey to fraud as cheats can pass on fake Rs 50 notes on to them and not be caught. The sufferer is the innocent common man!

Those running a racket of counterfeit notes have seized this opportunity to spread fake notes of all denominations in the market. Since everyone is not aware of the features of the new note, it has become an easy task for these gangs to fool people to spread fake currency in the market.

A recent report has revealed that since people are extra cautious in taking high-denomination banknotes like that of Rs 2000, these gangs have shifted their focus on to small notes like Rs 50.

A Jagran news report claimed that a large number of fake Rs 50 notes are circulating in the market. These notes are being prepared by scanning the original notes. If you give these notes a careful look, you can easily identify the difference. However, to your ease, here are 14 ways in which you can identify whether the new notes in your pocket are original or fake:

Rs 50 Note Reverse (Back) side features

1. Year of printing of the note on the left,
2. Swachh Bharat logo with slogan,
3. Language panel,
4. Motif of Hampi with Chariot,
5. Denominational numeral ५० in Devnagari.