Under the Drone 2.0 policy, India is all set to allow the commercial use of drones – as delivery vehicles, air taxis – beyond the visual line of sight.

From a blanket ban on drones until a few years ago to rolling out a robust regulatory roadmap for drone operations, the Indian government has come a long way. Now, it is gearing up for the next phase of growth. 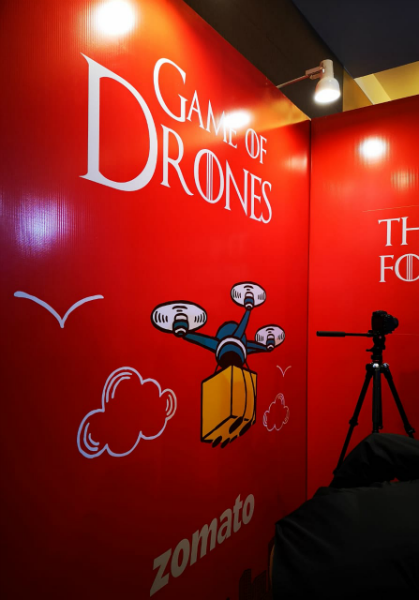 At the first-ever Global Aviation Summit organised by FICCI and the Government of India, Minister of State for Civil Aviation Jayant Sinha unveiled the Drone 2.0 policy that will come into effect in March 2019. It is expected to create a spectrum of business opportunities for all stakeholders – equipment manufacturers, service providers, engineers, etc. – in the drone sector.

Under the Drone 2.0 policy, India is all set to allow the commercial use of drones – as delivery vehicles, air taxis, and other services – beyond the visual line of sight. That means Zomato can deliver your food on drones. Even Uber can ferry you from Point A to B on air taxis. (Uber Air is already a thing in some Western countries. The aviation ministry hopes India will get there at some point.)

Until now, the government had put a ban on the commercial use of drones or unmanned aerial vehicles (UAVs) owing to security reasons. The Drone 1.0 policy unveiled in August 2018 limited the use of drones to only aerial photography, filmmaking, disaster relief, and recreational activities.

However, the Ministry of Civil Aviation has addressed these security concerns in its Drone 2.0 policy. To ensure safe and lawful drone operations in the country, the government has proposed a DigitalSkynetwork that will segregate airspace into drone corridors and label them as Red, Yellow and Green Zones.

Red Zones are those that bar drones from flying. Airports, military areas, and other high-security locations like Rashtrapati Bhavan and Parliament House come under Red Zones.

To fly drones in Yellow Zones, operators need to be “NPNT-compliant”. NPNT or ‘No Permission, No Takeoff’ is a protocol developed by the government to control the airspace used by drones.

And Green Zones will, of course, allow operators to get easy permissions to fly drones. 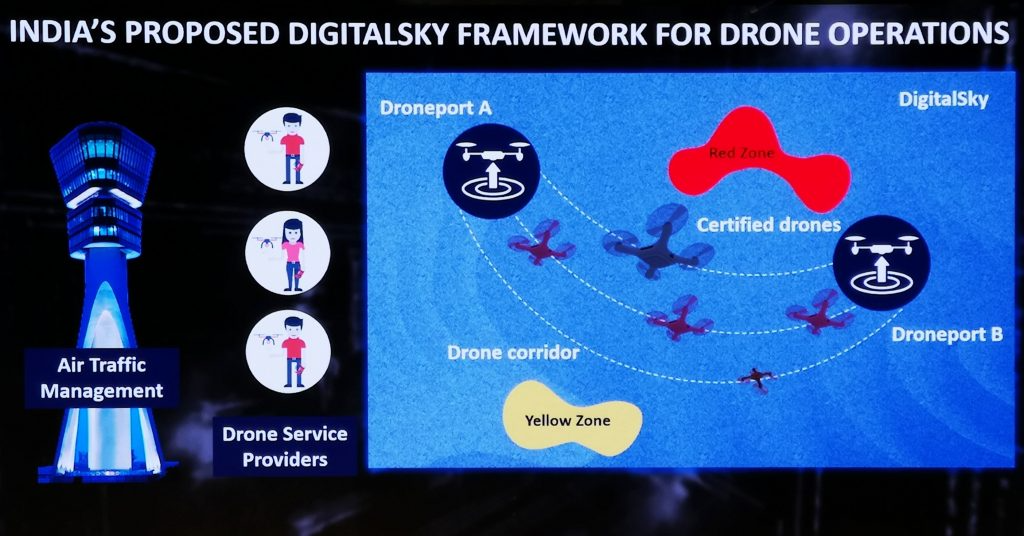 “Both the drone service provider and the air traffic management will have full control over the drone’s journey. If you deviate from your drone corridor, the traffic controller can safely land it or send it home. Different drone ports will be created for different types of drones.”

He also urged entrepreneurs and engineers to “start developing” drone technologies and applications keeping this framework in mind. “There will be plenty of Green Zones, and you will have enough opportunities to explore,” he added. Except for nano-drones, all other drones have to be registered for lawful operations.

“We want to put in place the right standards, the right regulations and the right ecosystem such that India can lead the world in drone technologies. We would also like to partner with other countries to make this happen,” Sinha said.

Globally, the commercial drone market is estimated to be $100 billion, with countries in the EU enabling a host of interesting use cases for businesses as well as customers. India is keen to grab a big share of that pie, the minister revealed.