WhatsApp now notifies users if a message has been frequently forwarded. 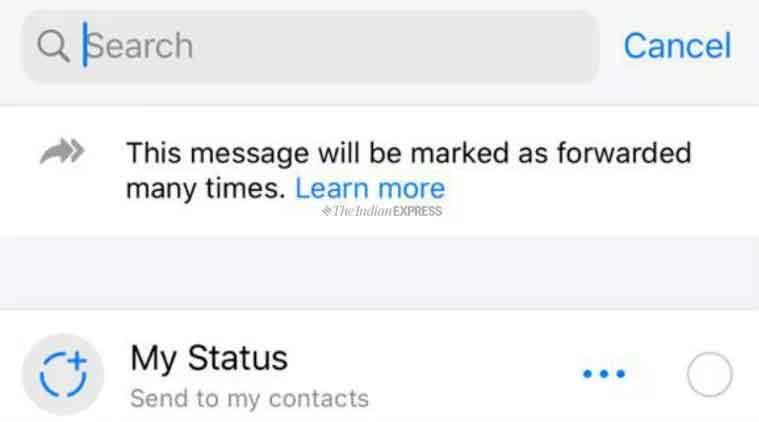 In yet another initiative to curb the spread of misinformation, WhatsApp has introduced a new feature, which will notify a user if a message has been forwarded many times. The feature is now live for everyone on the latest version of the app.

If a user is trying to forward a message that has been forwarded multiple times before, WhatsApp will notify users that it will be marked as “forwarded many times”. A user can continue to send the message or choose to quit. The idea is to alert a user that the message could be part of a chain.

To recall, a “frequently forwarded” label was anticipated for WhatsApp, but the feature is different.  This is because while the label on messages that have been forwarded many times will continue to say “Forwarded”, the message will sport a double arrow icon, instead of the single arrow icon seen on regular forwarded messages.

“We’ve recently introduced an update to our forwarded message label that helps people identify when they’ve received messages that were previously forwarded several times, such as a chain message. These highly forwarded messages will be marked with a double arrow icon and users will receive a notice when they are forwarding such a message,” a WhatsApp spokesperson told Indianexpress.com.

The notification will only appear for messages that have been forwarded more than five times. Such messages will have a double arrow icon. “This message will be marked as forwarded many times,” the notifications read. It works with text messages as well as images and videos.

WhatsApp has taken several measures to limit the spread of fake news of its platform including limiting forwards to five people, forwarded label, and more. The new “forwarded many times” feature will likely make users more mindful of whether the message has been composed by the sender or has simply been forwarded many times.