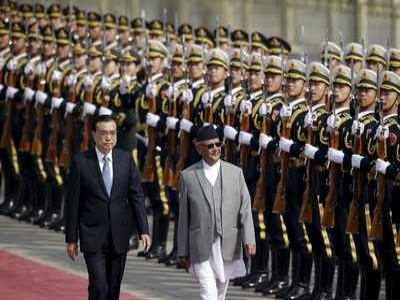 Oli, who is here on a five-day visit since June 19, held in-depth talks with President Xi on

Wednesday which included a lengthy one-on-one meeting followed by the delegation-level talks with Premier Li Keqiang on Thursday.

While the Chinese official media gave no details of the agreements, Nepalese daily the Kathmandu Post reported that the two countries have signed agreements on 10 different topics including one on the construction of a railway line. Four memorandum of understandings were also exchanged between them.

The agreement reached between the two sides also included promoting energy cooperation. They have also reached understanding regarding the use of highway in Tibet, energy, economic and technical cooperation and human resources development, the report said.

The key takeaway, however, was the reported railway link connecting Tibet with Nepal which could open up more trade and transport goods for the landlocked country.

During his talks with Oli, Xi assured him that he is keen to see the Nepal-China cross-border connectivity come to fruition.

“The train from Shigatse (Tibet) will arrive in Kathmandu,” the Post quoted Xi as telling Oli.

China already had built a vast network of rail and road connectivity in Tibet, which it wants to extend to Nepal.

“The train to the Tibetan highland has been hailed as a technological wonder. But many experts here caution building the trans-Himalayan railways will pose a great engineering challenge-perhaps even more demanding than the Tibetan railways. A huge chunk of the 70-120-km track will be studded with long and difficult tunnels and bridges,” the Post reported.

Oli, during his brief tenure in 2016, widened China-Nepal ties by signing the transit trade treaty with China to reduce the dependence of his country on India at the height of Madhesis agitation. He had sought expansion of road links through Tibet besides extension of China’s railway to Nepal through the Himalayas.

China’s state-run CCTV reported today that during their meeting, Li told Oli that China and Nepal are good friends and partners linked by mountains and rivers.

Li pointed out that the development of China-Nepal relations is not only beneficial to both sides, but also conducive to regional peace, stability and prosperity.

China is ready to work with Nepal to build a three-dimensional connectivity network across the Himalayas through port, railway, road, air and communications links, Li said.

Following the talks, the two prime ministers witnessed the signing of a number of bilateral cooperation documents between China and Nepal, the CCTV report said, without divulging details.

Get latest news & live updates on the go on your pc with News App. Download The Times of India news app for your device. Read more World news in English and other languages.