It is that time of the year again where you are supposed to follow the annual ritual of filing the Income tax return. The last day of filing the return for the year 2016-17 is July 31st and to avoid the last minute hustle, we advise you to start preparing already! Every year there are some changes made in the procedure of filing the return, therefore it is very important for every individual to understand the changes and rules before starting with the filing of their income tax return.

Who needs to file the return?

Any person whose gross taxable income after exclusions but before deductions exceeds the basic limit or those who have to claim a tax refund need to file the income tax return.

Here are 6 guidelines you must understand before the filing of return:

1. Understand which ITR form is applicable to you

The Central Board of Direct Taxes has made certain amendments in the ITR forms to simplify the filing process. Earlier there used to be 9 ITR forms for the current assessment year (AY), now the number has been cut short to 7 forms. ITR-2, ITR-2A, ITR-3A have now been rationalized into a single form which would be ITR-2. Subsequently, ITR-4 and ITR-4S have now been numbered as ITR-3 and ITR-4 (Sugan), respectively. 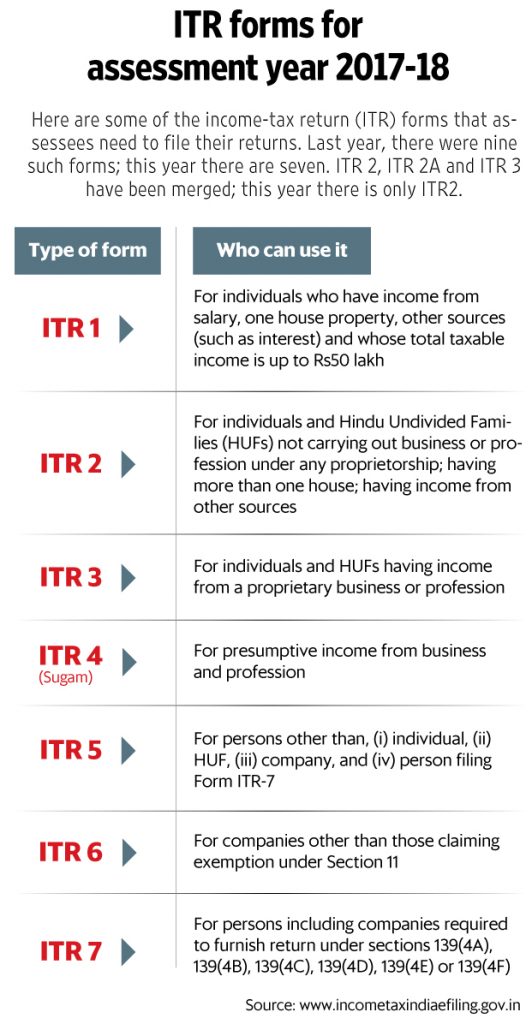 Also, various parts of ITR-1 (Sahaj) form—relating to tax calculation and deduction—have been streamlined. Hence, the only deductions specified are “sections, as only sections, 80C, 80D, 80G and 80TTA and the rest need to be mentioned in the ‘others’ box,

If you have deposited more than Rs. 2 lakh cash in your bank account after the demonetization, it has to be reported on the tax return. Just in case you’re thinking of missing out on any numbers, the Income Tax Department has already got the details like name, address, PAN number of the cash deposited by individuals.

This information can be easily matched with the ITR and in the case of a mismatch, the respective individual can expect a notice and might get into serious trouble. The penalty for misreporting can range from 50% to 200% of the under-reported income.

Besides the post-demonetization deposits, the tax department has other details too. And banks are supposed to report if an individual makes a cash deposit of more than Rs. 10 lakh or opens a fixed deposit of over Rs. 10 lakh.

The financial Act, 2017 has made it mandatory to mention the 12-digit Aadhaar number or the 28-digit Aadhaar enrolment number while filing the income tax return which was optional until last year.

There are certain obligatory disclosures that every individual needs to make on their tax return. The tax department has introduced a new column where the person who is filing the ITR will have to give details in the ITR of the money deposited as well as details of the bank account. This is majorly to account for those who have deposited Rs. 2 lakh or more in the bank account during demonetization period.

Apart from that, if there is any unexplained income or investment, that also has to be reported in the new ITR forms and that amount will be taxable at the rate of 66% plus surcharge and cess.

You can find the details of TDS (Tax Deducted at Source) already paid to the government by your employer, bank, self or any other party, online. To avoid the possibility of any errors, TDS must be checked before the filing of the ITR. These details are disclosed under Form 26AS.

The process of filing the Income Tax Return does not complete until it gets verified. There are 2 ways to do so- one is by sending the ITR V acknowledgment within 120 days of filing the return to their office, second, by verifying the returns online. In that case, there is no need to send the acknowledgment. E-verification can be done through Net banking, bank account Number, Aadhaar number and Demat account.