Now Use Amazon App To Scan-And-Pay Like Paytm, Google Pay. 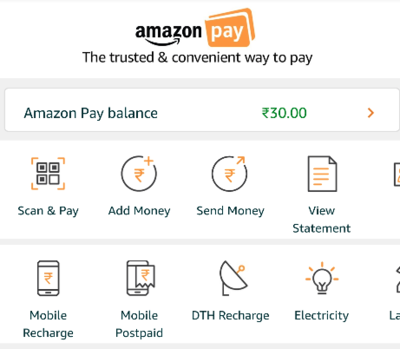 NEW DELHI: Amazon India has updated its Amazon Shopping app to add UPI payments-based scan-and-pay feature like Paytm, Google Pay and others. Interestingly, the company has not introduced a separate Amazon Pay app for the same and all Amazon.in users will have access to this feature automatically on the mobile app. The new payments feature can be found inside the Amazon Pay option of the same app. Amazon Pay feature is also present on the website, however, there is no scan-and-pay feature for obvious reasons.

The update has been rolled out to both Android and iOS version of the app, however, the option to Send and Request money is not yet available on iOS. Having said that both the versions of the app allows Scan & Pay option for UPI transactions.

With the introduction of this feature, Amazon Pay is now similar to any UPI-based payments app like Google Pay, Paytm, PhonePe and others.

How to use Amazon Pay UPI scan-and-pay feature

-Open the Amazon Shopping app and tap on the options menu (three horizontal parallel lines icon) on the top left.

-Scroll down to Amazon Pay and tap on it.

-To Send and Request money, you will have to setup your bank account and verify it.

The scan-and-pay option allows all Amazon app users to scan any UPI QR code and pay via Amazon Pay UPI. This means if you have any UPI QR code be it on Google Pay or PhonePe or Paytm, the Amazon Pay feature will be able to scan it and allow users to send money directly to the bank account. It is important to note that there is no option to send the Amazon account balance to your bank account or any other Amazon account.

The scan-and-pay Amazon Pay feature can either be used to shop in store which have the Amazon SmileCode or Amazon Shopping QR code. And if the scanned QR code is a UPI-enabled code, then the feature will initiate a direct bank account to bank account transaction will take place.