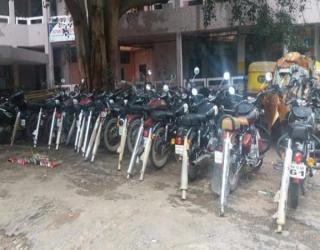 Although this was always known, following an opposing judgment by a divisional bench in Kerala, the Supreme Court has clarified that the law does not permit any type of modification that alters any specification made by the manufacturer or to what is mentioned on the vehicle registration certificate.

In its statement the Apex court said that it wanted known as the clear intent of the court that a vehicle cannot be altered so as to be exclusive of the particulars contained within a certificate of registration or are at a variation with the original specifications provided by the vehicle manufacturer.

“No vehicle can be altered so as to change original specification made by manufacturer. Such particulars cannot be altered which have been specified by the manufacturer for the purpose of entry in the certificate of registration,” a bench of Justices Arun Mishra and Vineet Saran said in its verdict. The court wisely left the statement open ended without specifying any particulars about which modifications are likely to put you in trouble, leaving it to authorities to use the law to fine offenders as they see fit.

According to the court, an alteration or a modification is a a change in structure of a vehicle which results in change in its basic feature.The top court set aside the judgement of a division bench of the Kerala High Court which had said that structural alteration was permissible as per the provisions of the Kerala Motor Vehicle Rules, 1989.

The court ruled that any changes that could range from modified exhausts, that change the decibel and emission output of a vehicle to changes in paint, tyre size and even fixtures of modified parts like spoilers and body panels can be considered outside the purview of the law.

In its closing statement, the court mentioned that the amended Motor Vehicle act provision specified the absolute fact that vehicles cannot be altered, in order to ensure road worthiness of the vehicle in terms of safety and the protection of the environment.