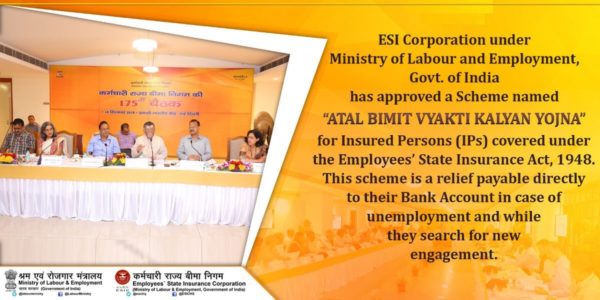 To provide financial support to those who lose their job, the Ministry of Labour and Employment on Wednesday launched a new scheme. At its 175th meeting, the Employees’ State Insurance Corporation (ESIC) approved the ‘Atal Bimit Vyakti Kalyan Yojana’ to provide insurance against unemployment to those covered under the Employees’ State Insurance Act, as per a statement from the Ministry.

“Considering the change in employment pattern and the current scenario of employment in India which has transformed from a long-term employment to fixed short-term engagement in the form of contract and tempting, the ESI Corporation has approved a Scheme named “ATAL BIMIT VYAKTI KALYAN YOJNA” for Insured Persons (IP) covered under the Employees’ State Insurance Act, 1948,” the statement said.

The scheme will provide relief to those who are looking for a new employment opportunity. The details of the scheme like eligibility conditions, application format, etc. would be issued later, it said.
The ESI Corporation has also approved the proposal for reimbursement of Rs. 10 per person to the employers to encourage the seeding of Aadhar (UID) in ESIC database of their workers and their family members.
Further, the eligibility conditions for availing Super Specialty treatment has now been relaxed from the earlier insurable employment of 2 years to 06 months with contribution requirement of only 78 days. Besides, the eligibility for availing Super Specialty treatment for dependents of Insured Person has now been relaxed to the insurable employment of one year with 156 days of contributions.
Additionally,  ESI Corporation has approved the proposal for increasing the Funeral Expenses of the insured persons from existing Rs. 10,000 to Rs. 15,000.