Unless extended by the government, July 31 is the last date to complete the income tax return (ITR) process every year. Depending on the nature of one’s income, one has to choose the most appropriate ITR form out of the several such forms made avialable by the incomet tax department.

Such individuals have to file ‘Form ITR-1 SAHAJ’ which is to be used “For individuals being a resident other than not ordinarily resident having Income from Salaries, one house property, other sources (Interest etc.) and having total income up to Rs 50 lakh,” ITR 1 form states.

Part A – Personal details like name, address, Aadhaar number (it is compulsory).

Part D – Here you will have to calculate total income, i.e., income minus deductions, and total tax payable on that amount

Here is how you can fill up the remaining parts of ITR1.

Step 1: Enter the “Income chargeable under the head Salaries” at the appropriate place. (B1) – Take the help of Form 16 that you would have received from your employer to enter this figure.

Step 2: As you have a self-occupied property, tick on the relevant box.

Step 3: Enter the amount of ‘interest payable on borrowed capital’ in the relevant box – If you do not have it, ask your lender to send you the statement with the break-up of principal and interest paid during the previous year. Annual value of self-occupied house is nil and the value therefore is shown as negative. (B2)

Step 4: Thereafter, enter the amount of “Income from Other Sources” – This includes interest earned on fixed deposits and other taxable investments. (B3)

Step 8: Based on the amount of C2, taxes will be calculated in Part D.

The illustration below shows an example with assumed figures.

It has been assumed that:

Income from other sources: Rs 1 lakh

Interest paid on home loan during the year: Rs 2.4 lakh 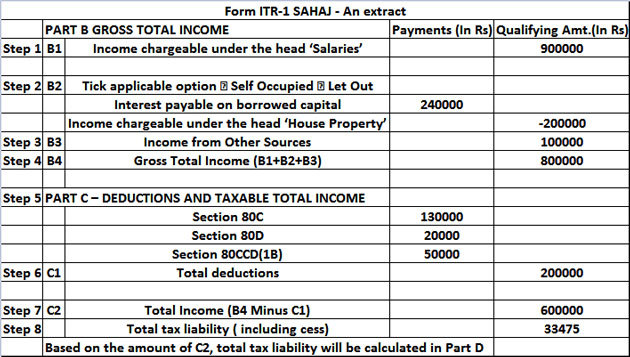 Be mindful of these
In the case of self-occupied property, deduction under section 24(b) cannot exceed Rs 2 lakh provided the loan is taken on or after April 1, 1999 and it is for the purpose of acquisition or construction and not for repair or reconstruction. In case of a self-occupied property, the amount over and above Rs 2 lakh is not allowed to be carried forward i.e. the tax benefit on it lapses.

Further, to avail deduction under section 24 (b), the acquisition or construction of the house has to be completed within 5 years from the end of the financial year in which the capital was borrowed. Therefore, the maximum negative value that can be shown in Step 3 is Rs 2 lakh. If any of the above conditions is not satisfied, then the limit of Rs 2 lakh will be reduced to Rs 30,000.