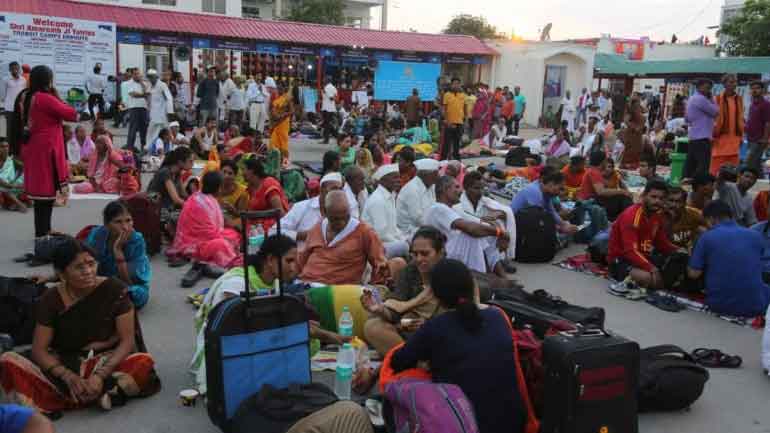 Sources in the Jammu and Kashmir (J&K) administration said that the annual Amarnath yatra has been called off in view of the latest intelligence inputs of terror threats. Speaking to India Today TV, the sources also said that the Amarnath yatra pilgrims have been advised to leave Kashmir without any wait.

The J&K government on Friday issued a security advisory for the Amarnath pilgrims and the tourists in the Valley, advising them to curtail the pilgrimage and take necessary measures to return as soon as possible.

The security advisory to the Amarnath pilgrims and the tourists in Kashmir stated: “Keeping in view the latest intelligence inputs of terror threats, with specific targeting of the Amarth Yatra, and given the prevailing security situation in the Kashmir Valley, in the interest of safety and security of the tourists and Amarnath yatris, it is advised that they may curtail their stay in the Valley immediately and take necessary measures to return as soon as possible.”

Top government sources in Centre also told India Today TV that the security advisory is serious. “The situation in Kashmir is extraordinary. The advisory is no ordinary advisory,” the sources said.

Earlier this week, the Amarnath yatra was suspended on account of bad weather, but now it has been curtailed due to security threats to the pilgrims. The sudden halting of the Amarnath yatra has further fuelled speculations of possible government action in Kashmir.

Following the advisory from the J&K administration, former IAS officer Shah Faesal asked if the government is considering a similar advisory for the locals as well.

“JK government has asked tourists and Amarnath yatris to leave Kashmir immediately in view of a security threat. Is the government considering any such advisory for locals also? Should Kashmiris also migrate to other places or is it that our lives do not matter?” tweeted Shah Faesal.

Meanwhile, former Chief Minister Mehbooba Mufti also echoed the same sentiments and asked if the government is concerned only about the security of the Amarnath pilgrims.

Taking to Twitter, Mehbooba Mufti said, “Complete chaos on the streets of Srinagar. People rushing to ATMs, petrol pumps and stocking up on essential supplies. Is GOI only concerned about the safety of yatris while Kashmiris have been left to their own devices?”

The government had recently moved nearly 35,000 paramilitary troops to Kashmir. The government said it was a routine exercise but sources said this was done to prepare the ground for the abrogation of Article 35 A.