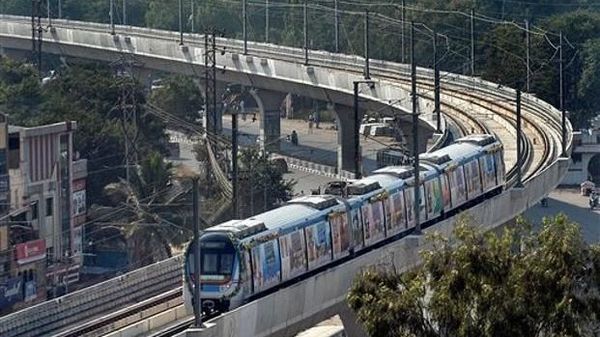 The safety certificate for the 11 km stretch between Jubilee Bus Station and Mahatma Gandhi Bus Station on corridor-II of the elevated Hyderabad Metro Rail project has been issued, officials said on Sunday.

The certificate was issued by Commissioner of Metro Rail Safety (CMRS) Janak Kumar Garg who inspected the corridor along with Reddy, L&T Metro Rail (Hyderabad) Limited Managing Director K V B Reddy and other senior officials over the last three days.

It has cleared the way for the introduction of passenger services on the last corridor of Hyderabad metro rail project phase-I, the release said.

The corridor has nine stations, it added.

HMRL officials had earlier said that it would take 16 minutes to cover the stretch between JBS to MGBS on the metro as against 45 minutes by road.

The trial runs on the route had commenced on November 25 last year.

Prime Minister Narendra Modi had inaugurated the 30 km stretch (between Miyapur and Nagole) out of the 72 km long elevated Hyderabad Metro Rail project, in November 2017.

Subsequently in September 2018, another 16-km stretch of Hyderabad Metro between Ameerpet to L B Nagar was commissioned.

In March 2019, a 10-km stretch of Hyderabad Metro Rail between Ameerpet and Hi-Tec City was inaugurated.

In November 2019, another 1.5 km stretch of Metro Rail Corridor-III between Hitec City station and Raidurg was inaugurated.